It’s a good time to be a virus, it seems. While everyone is likely well aware of the coronavirus pandemic, other viral diseases are also thriving, spreading locally and threatening already overwhelmed healthcare systems.
In Indonesia, dengue—which is spread through mosquitoes—has infected some 40,000 people so far this year, a nearly 16% rise from last year. Compounding the problem, most of Indonesia’s hospitals are now tasked with prioritizing patients with Covid-19, leaving those suffering from the painful and sometimes fatal symptoms of dengue without treatment.

In Latin America it’s even worse. The region saw the highest number of dengue cases in recorded history in 2019. And 2020 is on track to be bad too. Argentina right now has more reported cases of dengue than coronavirus. And experts worry that Brazil is about to become the next epicenter of the coronavirus pandemic just as its own dengue outbreak peaks. 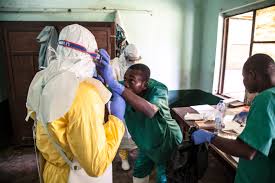 The Centers for Disease Control and Prevention is reporting large dengue outbreaks in Singapore, the Philippines, Sri Lanka, Pakistan, Bangladesh, and Nepal.

Meanwhile, the Democratic Republic of the Congo is scrambling to contain a new flare-up of an Ebola outbreak that began in 2018. The World Health Organization (WHO) reported a new series of cases there in April. As of May 5, there have been more than 3,500 confirmed or probable cases of Ebola in the region.

Health workers are also racing to vaccinate against yellow fever in Ethiopia, where an outbreak killed four people at the end of April. Both Mexico and Burundi are facing large outbreaks of measles and Saudi Arabia continues to battle an outbreak of Middle East Respiratory Syndrome, commonly known as MERS.

Viral outbreaks are hitting animals around the world, too. India and South Africa are both fighting outbreaks of African Swine Fever, which is highly contagious. In 2018, the virus shot through Asia, killing some 10% of the total pig population in some countries.

In the US, officials confirmed in April that a fatal strain of avian influenza had infected a commercial turkey flock in South Carolina. If it spreads, the disease could be devastating for a poultry industry already struggling with the economic impacts of Covid-19. In 2014 and 2015, more than 50 million chickens and turkeys across 15 states were killed to stop the spread of the virus, and much of the world banned American chicken and turkey products to avoid transmission.