MIDGET STUCK IN MAILBOX AFTER FALLING IN WHILE MAILING LETTER 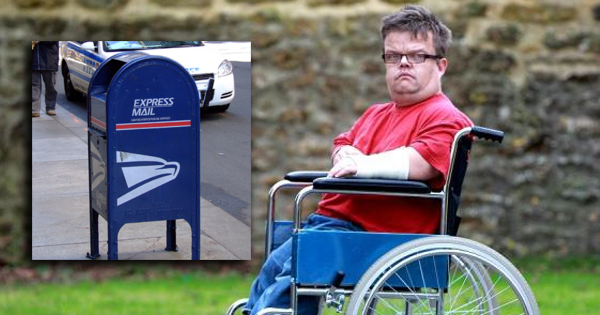 A man suffering from dwarfism almost died after falling inside a U.S. postal mailbox last Friday and remaining stuck inside the narrow container.

49-year old Walter Morrison, from Fayetteville in North Carolina, was found on Monday morning by a postal employee collecting the mail.

The 3’10” tall man was unconscious and severely dehydrated, so he was rapidly transported to the nearby Cape Fear Valley Medical Center where he was admitted in a critical condition.

Thomas Dunsmore, the mailman who found Mr. Morrison, described the scene in an interview with MSNBC.

“I opened the mailbox and saw this little guy upside down. At first, I simply laughed, but then I realized he was almost dead and I called 911.”

He had just finished extracting the poor man from the narrow container when the paramedics arrived a few minutes later.

Fortunately, the medical staff was able to stabilize Mr. Morrison after a few hours of intensive care, and he regained consciousness the next morning.

According to doctors, he broke his left thumb, but should suffer no long-term physical consequences from his misadventure.

Mr. Morrison says he fell in in the box while attempting to mail a letter and was unable to get out. He claims the accident was in part due to the fact that the mailbox was almost 40 years old and wasn’t as safe as the new ones.

Walter Morrison says he’s considering filing a lawsuit against the U.S.P.S. but first wants to take time to recover from his ordeal.